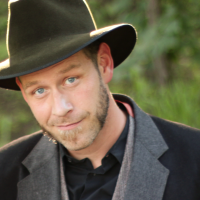 Tickets $10 per head, does not include food or alcohol

It is tradition for the Wingham Akoostik Festival opening to be held in the garden at Bent on Food. This is a great night for all of us and for the hardworking committee who enjoy a night out together before the big weekend.

We always book up fast so be quick as this years performer is another fabulous musician, and he is bringing some friends.

check out some of Scott's music here

Pop over and book your tickets

A roots balladeer with a rare personal warmth, Canada's Scott Cook has managed to distil the stories collected over eleven years touring across Canada, the USA, Europe, Asia, Australia and elsewhere into straight-talking, keenly observant verse. Road-worn, painfully honest, and deeply human, his tunes weave threads of folk, roots, blues, soul and country over spacious fingerstyle guitar and clawhammer banjo arrangements. His fourth release, One More Time Around, was nominated for a Canadian Folk Music Award, and its opening track "Pass It Along" won the Folk and Acoustic category in the 2013 UK Songwriting Contest, with UK magazine Maverick Country naming him "one of Canada's most inspiring and imaginative storytellers". In 2015 he put together a seven-piece honky-tonk band for his fifth studio album, Scott Cook and the Long Weekends Go Long, and in 2017 he released his sixth album Further Down the Line, earning his second Canadian Folk Music Award nomination, for English Songwriter of the Year. The album is packaged in a 132-page softcover book offering a look back, in words and pictures, on his last decade of near-incessant rambling. Cook is one of the hardest-working DIY troubadours on the road today, averaging over 150 shows and a dozen festivals every year since 2007. All the hard miles notwithstanding, he still believes that songs can change your life, and your life can change the world.

"Scott Cook has distilled his travels down into songs powered by a sharp eye for imagery, a healthy dose of humanity, and that unforgettable voice, that at the same time intones the rigors of the road and the most comfortable couch you have ever slept on." -David Francey, 3x Juno-winning songwriter

"As good a modern folkie as we have these days. A voice perfect for the genre. An understanding beyond the norm."  No Depression

"He sings his heart and soul, and in doing so lets light flood into your own... A good eye for imagery, a gentle human touch, a wry sense of humour, a whole lot of integrity, a warm, rugged voice and a bunch of memorable lines... Truly one of Woody Guthrie's children." - RnR Magazine

Bent on Food is fully licenced.