Bent Online - The Beez all the way from Berlin 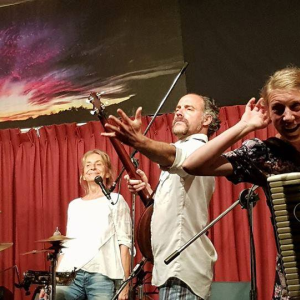 Don't miss out! We would love to see you.

In 1997, the native of Kreuzberg Deta C. Rayner, who was still the artistic director of the legendary midnight shows in the Variety Chameleon, founded the band. A short time later, Rob Rayner from Sydney, who was previously only in the rock music at home, rose. The two completely different genres rock and cabaret quickly merged into a unique mix. Since 2005, the band has been working with Peter D'Elia from San Francisco, who is seasoning the whole thing with bluegrass and Americana. In 2014, Annette Kluge, drummer and actress, from Hamburg was newly added.

The Beez are known and loved for their sheer inexhaustible ideas of making famous rock and pop hits as well as German hits appear in a completely new guise, but since 2009 they are increasingly producing their own musical honey. In December 2016, the second album was released exclusively with their own material. Each of the four musicians likes to write and sing in his mother tongue and so German or even Berlin songs alternate with English in a fast rhythm.