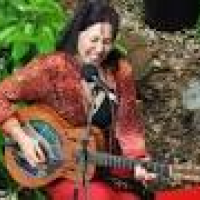 Join us as we welcome back to Bent on Food our great friend and first ever muso to play at the cafe way back in 2009. Peggy  was catalyst for Perth folk/pop outfit "Martha's Vineyard" (along with guitarist Anthony Best and bass player/manager Norman Parkhill) who had a short and sharp rise to national acclaim in 1990. Peggy was the main songwriter and lead singer of the band signed to rooArt through Polygram. The band released an eponymous CD which received critical acclaim and played some prestigious support tours with Paul Kelly, Eurythmics, Simply Red and INXS amongst others. Peggy has gone on to record four independent CDs to date and has toured extensively as a soloist throughout Australia and more recently Europe writing and recording with her cousin Ger Schaefer in the Netherlands.