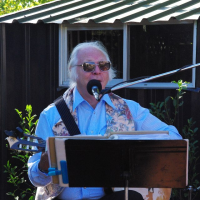 Join us at Bent on Food for an afternoon with Warren Targett.

is an entertainer, musician, songwriter and recording artist whose professional career spans over fifty years. He is experienced in theatrical and variety stage, tourist venues, recording, radio and television. has been a band member, solo entertainer, backing musician and singer, orchestra pit member, musical director – in and overseas. learned his entertainment skills in the coffee shops and clubs of in the early 1960s. Throughout the 1980s, performed as a “one-outer”, working shows a week.

Since 1962, is a respected teacher of music on the guitar who passes on his skills, dedication and love for a wide range of music to learners of all ages. He has taught seven internationally recognised players with four more well on the way up. also builds, repairs, restores and hotrods guitars.

We will be providing an a la carte menu from 1pm with a kids menu available.