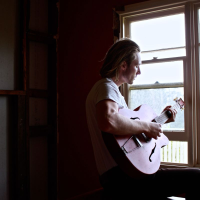 Spring is time to get out and about and we are looking forward to welcoming Melbourne’s insomniac and multi instrumentalist James Mcq to Bent on Food on Friday 7th September. He grew up restless writing a dismantled catalogue of folk songs on the East Coast of Victoria. Through his early teens James began playing with an array of lineups, gaining a small following playing at venues around rural Victoria. James hastily expanded out of the local scenes inexorably abandoning the coast for the city to establish his solo career. James’ disarming on-stage presence and jarring tales of disillusionment and alienation has already seen him play some of the most significant festivals in WA such as The Nannup Folk festival, as well as undertaking a 24 date tour across the nation in early 2018.
Listen to James here
Book a table to dine on 02 6557 0727 or by email here