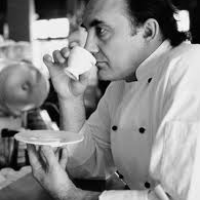 Stefano Manfredi showcases some of our best local produce in this wonderful demonstration style class. Book now to avoid disappointment. To book please go to our Bent on Food Cookery School page.

Stefano Manfredi is recognised as one of Australia’s leading chefs and internationally as a master of modern Italian cuisine. He has influenced the way we eat since first opening The Restaurant Manfredi in 1983, which was awarded a coveted Three Chefs Hats by the Sydney Morning Herald Good Food Guide 1995.

In October 2002, Stefano travelled to Italy to be presented with the inaugural trophy from the Italian International Culinary Institute for Foreigners by the Italian Prime Minister and his inclusion as one of Italy’s internationally recognised chefs in the first English translation of The Silver Spoon 2005 firmly cemented his reputation as ‘The Godfather’ of Italo-Australian cooking.  He recently contributed to the second edition of The Silver Spoon, re-released in September 2011.

In 2007, inspired by its coastal and rural setting, Stefano took the helm at Bells at Killcare with the creation of  hatted restaurant Manfredi at Bells . Here he has overseen the planting of extensive kitchen gardens which  inspire a more pastoral rendition of his cuisine. A year later with the establishment  of sister property Pretty Beach House  high on the escarpment of The Bouddi Peninsula , Manfredi's cuisine found a second home and can be enjoyed  as part of the all inclusive  guesthouse offering, his seasonal Italian-style cuisine  is avaiable all day, ‘casalinga style’.

Whilst maintaining his commitment at Manfredi Bells and Pretty Beach House , in 2011 Manfredi opened Balla at The Star casino, heralding his much-anticipated return to the Sydney dining scene.  The restaurant offers modern Milanese cuisine in an Italian Osteria setting.