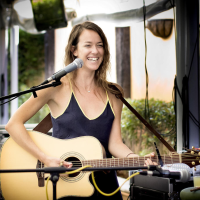 Hayley Grace is a multi-talented, Australian Singer Songwriter with that something special. Her soulful unmistakable sound and her energetic live shows looping guitar, vocals, beat boxing and percussion are making an impact everywhere she goes.

Hayley had a very colourful & musical childhood growing up on the East Coast of Australia , and performing live by age 15.  She refined her musical skills as the lead singer of Sydney’s premiere corporate entertainment band, Everyday People, before breaking out as a solo artist and spending the last 8 years touring around Australia and Internationally.  In 2012 she was part of the launch campaign for the new Sony Xperia mobile phone, where she toured with 4 extreme athletes up and down the east coast playing shows and hosting the online content of the campaign.  Later, touring extensively though India and Sri Lanka, she played every beach resort and bar up and down the west coast and playing shows as far north as the Indian Himalayas. This led to a 2-month contract at The Hilton Hotel in Colombo, Sri Lanka where she was headlining 6 nights a week until May 2013. Most recently her music has taken her overseas to countries such as Papua New Guinea, New Caledonia, Bali and Vanuatu, where she has done everything from is singing on cruise ships to playing in remote villages to high end corporate events and everything in between.

Hayley now resides in the beautiful coastal town of Byron Bay and spends her time travelling up and down the East Coast, playing everything from pubs to weddings to private functions and everything in-between, Her debut EP Ghost of a Girl was released in 2016. The first single "Sooner or Later" is currently being played on radio stations across Australia.