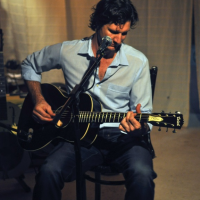 We are excited to present  DARREN JACK

Darren first fired up the Blues scene as the driving force behind award-winning band Third Degree which introduced a legion of Blues enthusiasts to his powerful vocals and exceptional artistry on the guitar. After six years fronting the band, Darren ventured out as a solo artist under the name Darren Jack . For the past 13 years he has collaborated with some of Australia’s finest musicians, touring throughout the country thrilling audiences with his passionate performances and proving why he is regarded as one of Australia’s top Blues musicians.

In 2012 Darren Jack released his fourth solo album “Better Place”. Featuring eight original tracks and a more refined approach to his powerful vocals, he experimented across genres in this album while retaining his true authenticity to the Blues. His relentless efforts and maturity as a songwriter were rewarded that year when the album swept up five awards at the 2012 Australian Blues Music Awards, including Best Album of the Year.

Further success and recognition continued when he won the Band Category of the Sydney Blues Challenge 2012 and was selected to represent Sydney in the International Blues Challenge in Memphis, Tennessee in 2013. Darren Jack received outstanding responses to his powerhouse trio...